This week you can look forward to a couple of articles thanks to it being the Easter season. We’re kicking it off with a Passover-centric post.

Matzo (also known as matzoh, matza, and matzah) is an unleavened bread that is traditionally eaten by Jewish people during the week-long Passover holiday. The Torah states that ordinary leavened breads, known as chametz, are forbidden during Passover. In fact, an entire household must be cleansed of any kind of bread or food that contain these kinds of grains. The punishment for eating chametz during Passover is called Kareth, also known as spiritual excision. This is one of the most severe punishments in Judaism and essentially means that one is cut off from their Jewiwsh brethren.

Matzo is important to Passover because of its symbolism. Passover itself is a commemoration of the Israelites escape from Egypt. In the book of Exodus, it says that the Israelites had to leave in such haste that they couldn’t wait for their bread dough to rise, therefore, when it was baked it became matzo. As such, the bread symbolises that haste. There are numerous explanations behind the symbolism of matzo.

The other symbolic reason for eating matzo is called lechem oni, “poor man’s bread.” It serves as a reminder to be humble, and to not forget what life was like in servitude. Also, leaven symbolises corruption and pride as it ‘puffs up’ the bread.

Hello all! Welcome back after such a long hiatus!

As you may have noticed, today’s topic has absolutely no relation to Christmas or Holiday eats. Never fear, there will a festive themed post before the 25th. More importantly, there will be a Mayan themed post on Friday. If we survive, of course.

In the meantime, I thought we could take a peek at the origin of Margherita Pizza. I have always rather enjoyed this story and am arrogant enough to assume that you’ll share my convictions.

Foods similar to pizza have been prepared since the Neolithic Age. In fact, records of people adding other ingredients to bread to make it more flavourful can be found throughout ancient history.

In short, evidence clearly suggests that the origins of pizza can’t be pinpointed to a single place or time. However, there is one particular historical tale that is attributed with making pizza the sensation that it is today.

In 1889, Queen Margherita of Savoy, and her husband, King Umbero I, were taking a royal tour of Italy. This was only a short 29 years after the unification of the country. Throughout their travels, Margherita had noticed a a great deal of peasants eating large, flat bread with colourful toppings.Curious, the queen ordered her guards to bring one of these so called ‘pizza breads’. 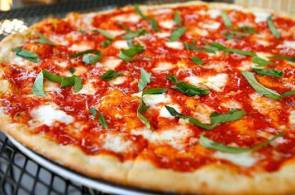 Margherita Pizza – a delicacy that’s literally fit for a Queen

The Queen loved the bread and would eat it every time she was out amongst the people, wich caused some consternation in Court. It was unseemly for a Queen to dine on peasant food. Naturally, Margherita didn’t care, because she was a bitchin’ queen who had just discovered pizza.

However, the Queen’s love for the bread was legitimized when a famous pizza maker, Raffaele Esposito, created a pizza topping in honour of the Queen. It was garnished with tomatoes, basil and mozzarella cheese in order to represent the Italian flag. He of course named it the Pizza Margherita. Legend also has it that he was the first to add cheese to pizza, which means that we’re all obliged to worship him as our deity from now on.

There is contention to this origin story. It wouldn’t be Delicious History if there wasn’t. Descriptions of a similar pizza recipe can be traced back to at least 1866 in the book “Customs and Traditions of Naples.” The author describes the most popular pizza toppings of the time, which included one with tomato and basil, often topped with slices of mozzarella.

Whatever the real origins of this pizza recipe are, it can be firmly declared that Esposito’s creation for Queen Margherita was the one that made it popular. Since then, it has grown into one of the most recognisable symbols of Italian food culture in the world, as well as a staple in the lives of most university and college students. All hail, Queen Margherita!

Next time – We talk about some Mayan staples to celebrate the end of the world.