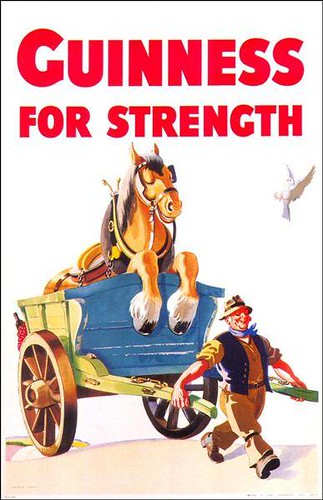 To celebrate this amazingly booze sodden day, we’re going to be incredibly stereotypical and borderline offensive by looking at the origin of Guinness.

What if I were to tell you that someone wanted to make beer in order to improve the health of the unwashed masses? It’s okay if you’re laughing at this notion. In fact, I’ll even give you a moment.

As laughable as this idea is, it’s actually quite true. Furthermore, in the 18th Century, it made perfect sense. This was a time when no one understood micro-organisms or how disease is spread. People routinely drank from the same water in which they dumped their garbage and sewage. As a result people died, and this made nearly everyone avoid water entirely. Instead, they drank alcoholic beverages. And no, you should not take this as a sign to start polluting your own water in order to justify drinking alcohol for hydration.

Popular spirits such as gin were being consumed en masse. Because of the high alcohol content, this resulted in a significant rise is violence, poverty and crime. To help heal society, some turned to brewing beer. It was lower in alcohol, the process of brewing killed the germs that made the water dangerous, and it was nutritious. No, really. Furthermore, the art of beer making was respected and honoured, and those who did it were considered to be do-gooders. Monks brewed it, Christians brewed it and aspiring young entrepreneurs like Arthur Guinness brewed it.

At the age of 27, Arthur Guinness had achieve far more than I probably will in a lifetime. In 1752, his Godfather Arthur Price, the Archbishop of Cashel, bequeathed £100 to him in his will. In true entrepreneural  fashion, Guinness invested the money and in 1755 bought a brewery at Leixlip, just 17 km from Dublin. This venture into the world of brewing was clearly successful, because in 1759 Guinness signed a 9,000 year lease on the St. James Gate Brewery for £45 per annum. Ten years later, Guinness first exported his ale to Great Britain.

Guinness’s sales soared from 350,000 barrels in 1868 to 779,000 barrels in 1876. In October 1886 Guinness became a public company, and was averaging sales of 1,138,000 barrels a year. This was despite the brewery’s refusal to either advertise or offer its beer at a discount. Even though Guinness owned no Public Houses, the company was valued at £6 million and shares were twenty times oversubscribed, with share prices rising to a 60% premium on the first day of trading.

Clearly, Guinness has remained successful today, but this isn’t all that the company has been know for over the years. Guinness has also been dedicated to being a company that has the interests of common people in mind. This is evident in Arthur Guinness’ reason for starting the company – to help improve health. This charitable ideal has lived on. Throughout the centuries, Guinness has continued to prove that they don’t just want to make a profit, they want to make a difference. They started by paying better wages than any other employer in Ireland. Then they decided they should provide an entire slate of services to improve the lives of their workers. With the passing of decades, they became one of the most generous, life-changing employers the world had ever seen.

Guinness also showed unparalleled upport for the war effort. During World War II, the company promised every British soldier a bottle of Guinness with his Christmas meal. However, there was a problem. Their manpower was depleted because so many of its workers were serving in the military. Despite this setback, they were determined to keep their promise. The brewery operated around the clock, but there simply weren’t enough employees. Clearly the generous spirit of the company had been passed on though, because retired workers showed up to volunteer their time. They were then followed by workers from competing breweries. By Christmas, every soldier had his pint.

Deeds like these are prominent throughout the history of the Guinness company, and are just as inspiring as some of the family members themselves. One heir received five million pounds for a wedding gift, but then moved with his new wife into a poor neighborhood to draw attention to the poverty in the land. We don’t hear about many other heirs doing this in the media.

Given the generous nature of the Guinness company, it is hardly surprising that its beer has become synonymous with St. Patrick’s Day. Sure, it’s Irish, so of course it’s going to be consumed in vast quantities on a day that celebrates Irish culture and heritage. However, I think that the symbol Guinness  offers is far more significant than that. Guinness is a beer that from its very conception was being brewed as a benefit for others. It’s a symbol struggle, national pride and overcoming adversity. As such, I urge you all to have a pint of Guinness today, not as an excuse to  get wasted whilst wearing green, but in honour Arthur, and all those who use the resources at their exposal in order to help others.