I bet that caught everyone’s attention!

Today we’ll be continuing Choctoberfest with a look at the role of chocolate during wartime. Interestingly enough, I don’t mean chocolate on the Homefront. This is purely an insight into how chocolate played a role in the US military during wartime. Pretty cool, huh?

Strangely,  Hershey’s have produced more than just their signature Kisses and crazy delicious Cookies and Cream Bars in the past. In fact, they’ve been heavily involved in providing rations for soldiers since before WWII .

Hershey’s involvement with the production of military rations began when Army Quartermaster Captain Paul Logan met with William Murrie, President of Hershey’s Chocolate, in April 1937. This visit resulted in the experimental production of a ration bar which would meet the needs of troops during wartime.

Unfortunately, ordinary chocolate bars melt far too easily in the summer heat, and therefore wouldn’t be viable for a soldier to carry around. Furthermore, normal bars were considered to be too tempting to be used as an emergency ration. As such,  Captain Logan outlined strict requirements for the bar, with was to be called The D Ration:

Unfortunately, the Hershey chemists may have erred too much on the side of un-palatability. The D Ration was almost universally detested, and was often discarded or traded for more appetizing foods from unsuspecting civilians. Troops called the bar “Hitler’s Secret Weapon” due to its effect on soldier’s intestinal tracts. Also, because of how chewy it was, it couldn’t be eaten by soldiers with poor dentition. Even those with good dental work often found it necessary to shave slices off the bar with a knife in order to consume it.

The first of the Field Ration D bars were tested in the Philippines, Hawaii, Panama and at various Army posts throughout the US. The results of the test were satisfactory and Field Ration ‘D’ was approved for wartime use.

In 1939, Hershey was able to produce 100,000 units per day. By the end of 1945, production lines on three floors of the plant were producing approximately 24 million units per week. It has been estimated that between 1940 and 1945, over three billion ration units were produced and distributed to soldiers around the world.

In 1943, the US Army inquired about the possibility of obtaining a heat resistant bar that didn’t taste like absolute arse. After a short period of experimentation, Hershey’s Tropical Chocolate Bar was added to the list of wartime production items. This bar was destined to replace the D Ration by 1945. In July of 1971, Hershey’s Tropical Bar went to the moon with the Apollo 15 team. Reports state that it was only a slight improvement on the original D Ration bar.

In recognition of its outstanding war effort, Hershey’s was awarded the Army-Navy ‘E’ Production Award in 1942. The Corporation received a flag to fly above the chocolate plant and a lapel pin for every employee. The award was presented for exceeding all production expectations in the manufacturing of an Emergency Field Ration. This wartime honour recognized companies that consistently met high standards of quality and quantity in light of available resources. By the end of WWII, Hershey’s would receive a total of five Army-Navy ‘E’ awards.

Production of the D ration bar was discontinued at the end of WWII. However, Hershey’s Tropical Bar remained a standard ration for the United States Armed Forces. The Tropical Bar saw action in Korea and Vietnam before being declared obsolete. 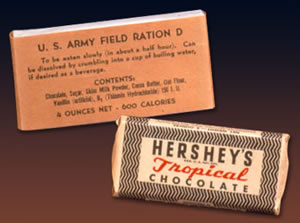 In the late 1980s, the US Army Lab created a new high-temperature chocolate bar that could withstand heat in excess of 60 °C (140 °F). It was dubbed The Congo Bar, and 144, 000 were shipped out to troops during Operation Desert Shield and Operation Desert Storm. While Army spokesmen said that the bar’s taste was good, troop reactions were mixed and the bar was not put into full production.

The Gulf War ended before all bars could be shipped, so the remainder was packaged in a desert camo wrapper and was dubbed the Desert Bar. It proved to be a brief novelty for consumers, but Hershey declined to make more after supplies ran out.

So it seems that chocolate has had quite a significant influence on 20th century militaristic history, even if it wasn’t particularly sweet. In closing, here are a few more interesting wartime facts about chocolate:

Advertisement for the Cadbury Ration Bar

– Cadbury Dairy Milk Chocolate came off the shelves in 1941 when the government banned manufacturers from using fresh milk. Instead, they released Ration Chocolate, made with dried skimmed milk powder.

– The Nazi’s began producing bombs that were disguised as chocolate bars. A more in-depth look at this amazing story can be found in one of my older posts – Death by Chocolate:  Hitler’s Camouflaged Bomb Plot

Don’t forget that Delicious History is also out there in Social Media realm sharing awesome history-related pics, quotes, facts and such! We can be found on Facebook, Twitter, Pinterest and Tumblr.